5 replies to this topic

The most common issue was blank passages (no commentary) and misplaced passages (commentary appearing in the wrong verse). Overlapping comments were also creating problems in various books and they have been greatly reduced. A large number of miscellaneous errors were also fixed, based on your feedback. Context: My original source documents are broken into nearly 1,100 files. About 500+ of those files were changed with this revision.

Valued for generations and consulted by Bible scholars everywhere, John Peter Lange's Commentary on the Holy Scripture has withstood the test of time. Hundreds of times per year, even today, Lange is quoted and cited in dissertations and books. Lange’s It's one of the finest academic commentary sets that has ever been produced..

John MacArthur lists Langes as a must-have in its 850 Books for Biblical Expositors.

Cyril Barber (in The Minister’s Library Vol 1) has this set marked with an “*”, meaning it is one of the best. He writes “One of the best multivolume commentaries available...."

Even Charles Spurgeon, who disagreed with portions of Lange's theology, wrote:

With this volume the English issue of Lange’s great Commentary is completed, and all ministers and students are deeply indebted to Dr. Schaff and the Messrs. Homiletically, these commentaries are of high value. Often by a single sentence they will start the mind and give it a push along a line of thought, and this is the chief thing that most of us need.


About Lange
Johann Peter Lange (1802-1884) was a professor in Zürich, professor of evangelical theology in the University of Bonn, and a prolific author. Lange began this commentary series in 1857.

About the Commentary
As the introduction to the American version says: this commentary series "aims to give all that the minister and Biblical student can desire in one work." The claim is not hyperbole. Lange aims high, and the contributors and editors give it their all.

To this end, the design is a wonder. Many wish modern series would emulate it as effectively. Each book has an introduction that is both academically and homiletically (i.e. with an aim to preaching) focused.

Structure of the Commentary
The text is a fresh translation, followed by a threefold commentary on each section. This is absolute genius. Not only does the commentary help in analyzing a passage, but often it assists in formulating a plan to proclaim or teach it.

The contributors include some of the more prominent German and English-language scholars of the day. The English-language contributors comprise an impressive constellation of scholars from around the doctrinal spectrum, including Philip Schaff, Charles A. Briggs, W. G. T. Shedd, Patrick Fairbairn, W. Henry Green, John A. Broadus, James Strong, and C. H. Toy.

This is not the butchered version of Lange's New Testament you may have seen elsewhere. This is properly formatted! 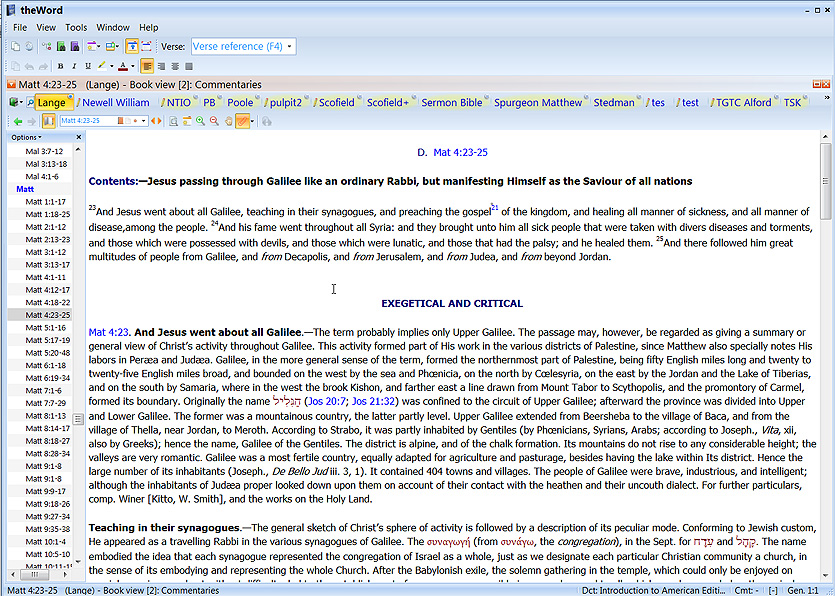 Acknowledgements
Brent Hildebrand for ToolTip NT, my authoring tool of choice for e-Sword. Let me clear: This project would not have happened without Brent's fixes, coding, and accommodation of my requests.

"Raymond" is a person I know who cannot reveal his identity because he lives in a country where Christians are routinely killed. "Raymond" wrote a series of very complicated regular expression search/replacements to make this commentary possible. Without Raymond, the footnotes would have been a mess! 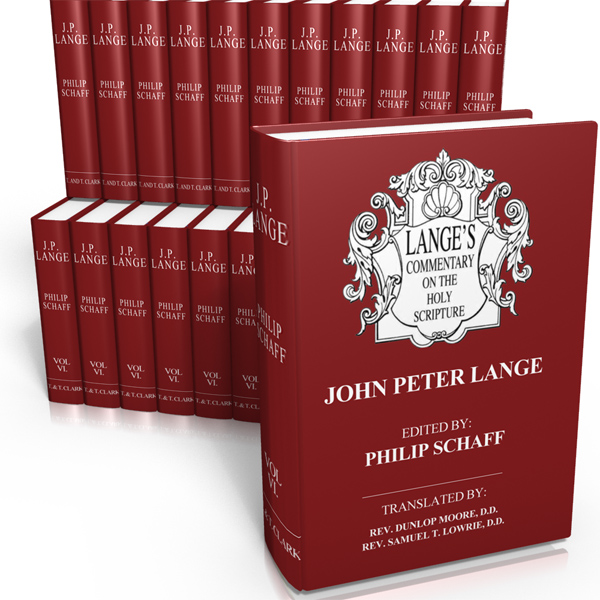 Josh....
I've already said thank you ....over on the E-sword site. I'm saying it again on this site to show my appreciation for your seemingly tireless
work to advance the Gospel of our Lord....and to point out to all our friends here at theWord...to take this precious work and use it...learn all the fine aspects of it....and it will serve you well for a long long time in you Christian walk and study !! The Word is a fine Bible Study Program..and this is a work worthy of just such a program.

I just read part of Lange's comments on Genesis 6, in particular the meaning of "Sons of God":

"The question, what kind of beings are we to understand by the Sons of God, has been answered in different ways from the earliest times, and has lately, again, given occasion to lively theological discussions"

His exposition of the passage is brilliant. He thoroughly answers the question in a way that leaves no stone unturned. I can't believe this was written over 150 years ago. It is so relevant for us today.

It is snippets (reams) of information like this that make this module so worthwhile.

Thanks Josh for making this resource available to users of theWord.

This is truly a tremendous resource that you have made available for theWord users.

I must say it is heavy reading. I spent a few hours digesting Lange's comments on John 14:16 "another Comforter" before I understood what his position was on the subject, due in part to him liberally quoting alternate views at length, but then giving his objections or preferred view in the same paragraph. Today, as I read the same section again, it made clear sense. I guess, one needs to become familiar with the style and structure of Lange's writing.

Lange uses a lot of Hebrew and Greek words in his comments. Not knowing Greek, theWord's "right-click" - "look up" feature pointed to all open dictionary/topic modules containing the Greek or Hebrew word I had clicked on. This freature of theWord is a big plus when using this resource (one of the advantages over eSword). For the Latin words, I initially kept the web browser open on "Google Translate". Now, however, thanks to Douglas Hamp's collection of modules, if you want to look up the Latin quotes in Lange's commentatry via theWord's "Right-click" - "Lookup xxxx in..." option, this module works great : http://douglashamp.com/wp-content/uploa ... y.dct_.exe

Highly reccommend this module to anyone who is interested in deep exegetical study.

Once again, thanks for a great resource Josh.

You did a great job in making this very useful commentary available for THe Word. Thank you very much. Johan

Excellent job. However, the module could not be used in iBible, it is encrypted.


This topic has been visited by 69 user(s)