Commentaries - The Bible of the Expositor and the Evangelist (39 vols) + (Preacher and His Preaching, Pastoral Problems, Christ the Incomparable, Seven NT Soul Winners)

While not as extensive as other homiletical works, Riley’s sermons contain solid, practical thoughts for modern teaching, preaching, and study. Read Riley's biography below for more about his life and work leading up to this set.

The Preacher and His Preaching
This classic book deals with sermon creation and sermon delivery. Still heavily quoted by modern authors and excerpted by modern professors in seminaries.

Pastoral Problems
Written at the end of his career (and near death), Riley provides unusually blunt advice on running a church. While a few topics are outdated, this classic book still applies today. Everything from his thoughts on running a church—to—what to say at funerals—to—handling problematic people. You name it—and it’s in there.

Christ the Incomparable
Riley references this book several times in gospels of the Expositor Set.

Seven New Testament Soul-Winners
Riley was a dedicated soul winner. Most of the 7,000 members of his church were added by baptism. He not only personally evangelized, he preached sermons motivating others to become soul winners. It was THE reason he believed he was on this earth. The sermons below were apart of a series on soul winning.

About the Author
William Bell Riley (March 22, 1861-December 5, 1947) was called the "The Grand Old Man of Fundamentalism." Riley is credited with coining the term “fundamentalist”. Riley believed in the literal interpretation of the Bible wherever possible. He believed in a literal 6 day creation, that heaven and hell literally exist, that the miracles in the Old and New Testaments literally happened, and that Revelation and applicable portions of OT prophecy will literally happen.

Riley graduated from The Southern Baptist Theological Seminary in Louisville, Kentucky. He pastored several churches before landing at First Baptist Church, Minneapolis, Minnesota in 1897. He pastored there for 45 years and another 5 as pastor emeritus until his death. The church had 585 members when he arrived and 7,000+ members when he died. One Tenth of all Baptists in Minnesota belonged to his church. 4,000 members of his church were added by baptism because of Riley’s absolute insistence that he personally evangelize as much as humanly possible.

In 1919 he brought together 6,000 conservative Christians for the first conference of the World Christian Fundamentalist Association, which he founded. Riley warned that mainline Protestant denominations “were coming increasingly under the sway of modernism” and led the effort to purge the Northern Baptist Convention of liberals.

His rigid, conservative approach to Scripture earned him accolades from allies and criticism from opponents. His critics complained that his rigid beliefs contributed to the religious polarization of American society. His allies appreciated his opposition to modernism. Riley vehemently opposed evolution, which he called the “propaganda of infidelity, palmed off in the name of science.”

Billy Graham preached Riley’s funeral and Harry A. Ironside noted, "We need to remember that God never repeats Himself. . .He will raise up others to carry on, but there will never be a second man of Dr. Riley's stamp."

Special Thanks to…
The BibleSupport/wordModules community for funding the book purchases.

James Rice for digitizing 75% of the set. 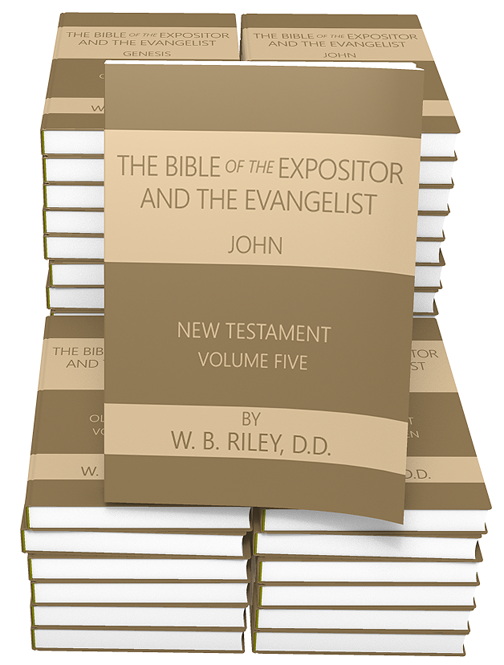 
This topic has been visited by 42 user(s)