1 reply to this topic

McClintock's and Strong's Cyclopedia of Biblical, Theological and Ecclesiastical Literature is one of the most comprehensive Bible dictionaries/encyclopedia's ever produced. It's certainly the largest theWord ever produced with over 500 megabytes of images and text!

You know James Strong from Strong's Concordance. James Strong, John McClintock and 200 other writers (see end of file description for the most popular) spent 20 years compiling, editing, and writing the Cyclopedia of Biblical, Theological and Ecclesiastical Literature. Even modern Bible encyclopedia's lack the depth of the Cyclopedia's nearly 50,000 entries and 17 million words!

Article Quality
Many of its articles are more comprehensive than articles on the same subjects appearing today. For example, the article on the Talmud not only explains the background and origin of the Jewish writings, but uses excerpts from the Talmud to explain the weaknesses of the writings. Other examples of the detailed articles on biblical, historical, and theological topics include: Interesting facts about this resource: FREE
Print editions sell for more than $1,000. Other Bible study software charge $10-$100, all while telling you what a great deal it is. Here, it's completely free.

How to Use This Resource with theWord

How theWord Module Differs from the Printed Edition
I extracted this public domain text from publicly available PDF files. This is the only digitized source for this text.

I addressed the following issues:

Hebrew/Greek converted to Unicode for proper display in theWord. Corrected the thousands of instances where Hebrew/Greek "runs into" English text.

Thousands of paragraphs spanned more than 1 printed pages (many more than several). Ever tried reading a paragraph that long? It's very cumbersome. These paragraphs have been broken into smaller paragraphs for ease of reading.

Verse or Chapter? The original PDF files handled about 80% of verse references properly. The other 20% were referenced as a comma, i.e. Joshua 1, 5. These were corrected to Joshua 1:5 when appropriate. This required extra effort to distinguish when the text intended to refer to a specific verse (Joshua 1:5) or multiple chapters (Joshua 1,5).

Image Illustrations: By modern standards, the images are very lacking. Yet many are very helpful as you are reading to visualize what the text describes. In a few cases, certain images were not included because of poor visual quality.

Article Entry Consolidation: The original Cyclopedia required 10 volumes. Then the authors realized they neglected many potential topics. Volumes 11-12 go back through A-Z twice with new and addendum articles.

Some articles are new topics completely unaddressed in volumes 1-10. Some articles were expanded versions of older articles. And a few articles were either exact duplicates or written with different wording but no new information (i.e. a classic case of "we forgot we already wrote an article for this topic in Volumes 1-10", which isn't surprising with 200 editors and writers involved in the project).

No pump-and-dump technical script modules. I did not force fit implicit "Bible-like" references to Justin, Polycarp, the Vulgate, the LXX, and the hundreds of other Bible manuscripts, translations, and apocryphal/early church/ancient writers into standard Bible versification, with wildly inaccurate (and silly) results. If a verse belonging to the 66 book Protestant cannon is ToolTipped, you can bet it's an authentic verse reference and it's the verse the text speaks of unless: there was an error in the printed edition or unless the verse is not ToolTipped. An untooltipped reference is when I could not determine what the author intended to reference.

Nothing is Error Free: No matter how hard we try. I corrected many errors in the original PDFs but, I'm sure some remain. Report errors to me and I will correct them in future updates.

Brent Hildebrand: for ToolTip 4 and his willingness to code special features just for me! Brent's the reason we are able to check the validity of verse references and not just pretend they're real. He's also the reason you have a non-graphical version of this resource.. He and Raymond are the reason I can focus on resource quality instead of programming code—every option he gives me is one less solution I have to code.

Raymond: for his growing collection of module making tools, which saved over 40 hours of work on this project alone.

We only have so much time in every day. These men have "given" me thousands of hours! 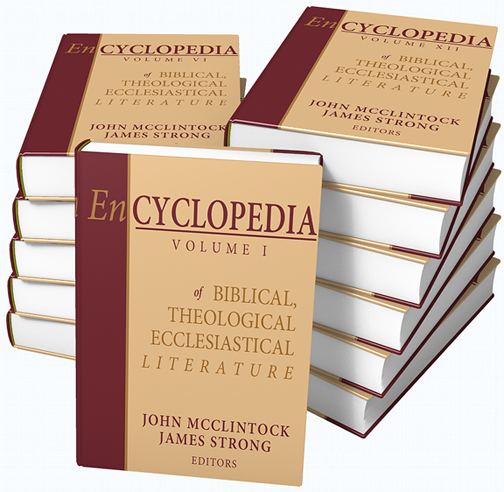 General Preface to Cyclopedia (with most popular authors):
The history of the inception, progress, and completion of the present work, if told in its details of incident, change, and episode, would form no inconsiderable volume of almost romantic interest. We deem it proper here to give only a very brief sketch of its principal facts. It was begun by its original projectors, the joint authors named on the title-page, in 1853, on the simple plan, as to the division of editorial labor, that Dr. Strong should have exclusive charge of the Biblical department, and Dr. Mcclintock of the remainder; the intention being that these two sections should occupy, on the whole, as nearly as possible equal spaces in the volumes. This latter feature of the work has been substantially maintained throughout, although the biographical element, which, as the original prospectus stated, was to include "the chief facts in the lives of popes, cardinals, bishops, reformers, saints, martyrs, evangelists, rabbis, and heretics, together with brief sketches of eminent preachers and writers in every branch of the Church, but containing only the names of deceased persons," naturally enlarged one of these sections to a noticeable extent. These two editors were assisted by a large corps of collaborators and contributors, including in all nearly two hundred persons of various religious denominations. The first volume was issued in 1867 and the final one in 1887.

In 1870, when the preparation of the fourth volume had but commenced, the decease of Dr. Mcclintock devolved the labor of continuing and finishing the entire work upon his colleague, Dr. Strong. Before the completion of the task, the four original members of the publishing firm which undertook and carried it through likewise passed away, as also the head printer and nearly one half the writers engaged upon it. The twelve volumes contain more than seventeen millions of words, composing over 31,000 articles, very many of them copious, but all studiously written, seven eighths of which the surviving editor prepared or revised in the manuscript, and repeatedly read and corrected in the proof-sheets. The public has recognized it as one of the most gigantic literary enterprises of the age, both in its scope and execution. The design was to cover the entire field of general religious knowledge, with a degree of detail hitherto unattempted; and that end it has accomplished in a manner that has had no successful rival. This record is no more than justice to the credit of the living as well as to the memory of the departed.

From the beginning it was the avowed purpose of the work to embrace the substance of all important information of general public interest within its wide domain that had been collected and presented in the pages of preceding publications of a similar character. Most of this was a legacy of the past, and therefore the legitimate property of students and readers for all time. In addition, a vast amount of entirely new material was incorporated into the work, and the entire mass of borrowed as well as original matter was digested and assimilated into a consistent and homogenous whole, under a single alphabet. The later articles, and especially the two supplementary volumes, afforded an opportunity of incorporating subsequent discoveries, more recent literature, and new topics, so as to keep the work fully abreast of the progress of the times; and, although no formal revision has been made of the volumes at any one time, yet innumerable corrections and additions have been effected from time to time in the electrotype plates, as additional copies were printed; and the present impression has had the benefit of an extensive and systematic substitution of the latest accessible data in the statistical line. We are therefore entitled to present it to the public as still fresh and available for all purposes of general or professional use and consultation. During all the stages of its career no expenditure of time, labor, or money has been spared by its writers, editors, or publishers in the effort to make it complete, accurate, and serviceable, and it has attained an established reputation for scholarly thoroughness and catholic liberality. The best evidence of its practical utility is found in the fact of its well-worn condition on the shelves and tables of its purchasers. The general favor with which it has been received by readers and students of all denominations is gratifying proof of its excellence of plan and its successful achievement, while its widening circulation evinces its continued adaptation to the public wants.

The following is an alphabetical list of the most prominent among the names of its contributors of special articles, besides the editors and their assistants.

B. H. N.—The late Prof. B. H. Nadal, of the Drew Theological Seminary.

Scribe
Back to New theWord Downloads · Next Unread Topic →


This topic has been visited by 47 user(s)