Warning: Illegal string offset 'html' in /home/wordmodules/cache/skin_cache/cacheid_1/skin_topic.php on line 975 Commentaries - Owen, John - An Exposition of the Epistle to the Hebrews (7 vols) - theWord Modules

Commentaries - Owen, John - An Exposition of the Epistle to the Hebrews (7 vols)

Note: This is not the poorly formatted version (with missing content) previously deleted from this website (see screenshots below for a comparison).

About John Owen's Exposition of Hebrews
The author of Hebrews wanted you to know one important fact: Christ is superior and so is Christianity. John Owen captures this sentiment, providing one of the most unique, thoughtful commentaries ever written on the Book of Hebrews. Owen weaves much of the Bible through Hebrews in an exposition like no other.

Owen's commentary contains critical comments on the Greek text and also discussion of theology and doctrine. At the same time, Owen focuses on practical application of Hebrews.

This work is filled with profound and practical theology. By drawing “good and necessary consequences” from the text, Owen explores nearly the entire realm of Christian theology with thoughtful exegesis and exposition. This is evident throughout, but the preliminary “exercitations” are of particular value. His theological introduction to Hebrews (Concerning the Epistle to the Hebrews) will be of great help to those who desire to understand the profound significance of the book in the canon of Scripture. His treatments of the Messiah, the Jewish Church, and the Priestly office of Christ are valuable in their own right.

As a whole, Owen’s treatment of Hebrews serves as a comparison and contrast between Old Testament and New Testament worship.

James Innell Packer wrote, "Today’s evolutionary mind-set makes us expect Puritan Bible-work to be cruder and shallower than ours, but this classic work joins hands with Matthew Henry’s great exposition of the entire Bible to prove us wrong"

Value Beyond Hebrews
The value of the Hebrews set for preaching is not limited to preaching through the epistle to the Hebrews. For example, when preparing a sermon on Haggai 2:6-7 (on the “shaking” of heaven and earth) one might gain more from Owen’s exposition of this passage than from most other commentaries on Haggai. Owen’s expository skills are evident throughout his works, yet his expositions of various texts in his work on Hebrews stand out for their depth and precision. At some seminaries, Owen’s exposition of Isaiah 7:10-16 (the “virgin birth” prophesy) is required reading for a Hebrew exegesis.

14 megabytes of text (when uncompressed) spanning 4,000 pages, Owen wrote as much about Hebrews as many write about the entire New Testament! That's because Owen wrote about much more than just Hebrews!

Commentary vs. Book format
Two theWord resources arose from this content: Most will prefer the commentary in commentary format and the first 2 volumes in Book format. For those that don't like commentary resources over a single Bible book, the Book version was created for you!

Not the Poorly Formatted Version
If you downloaded the (now deleted) version uploaded last year, delete it. This version is better formatted: 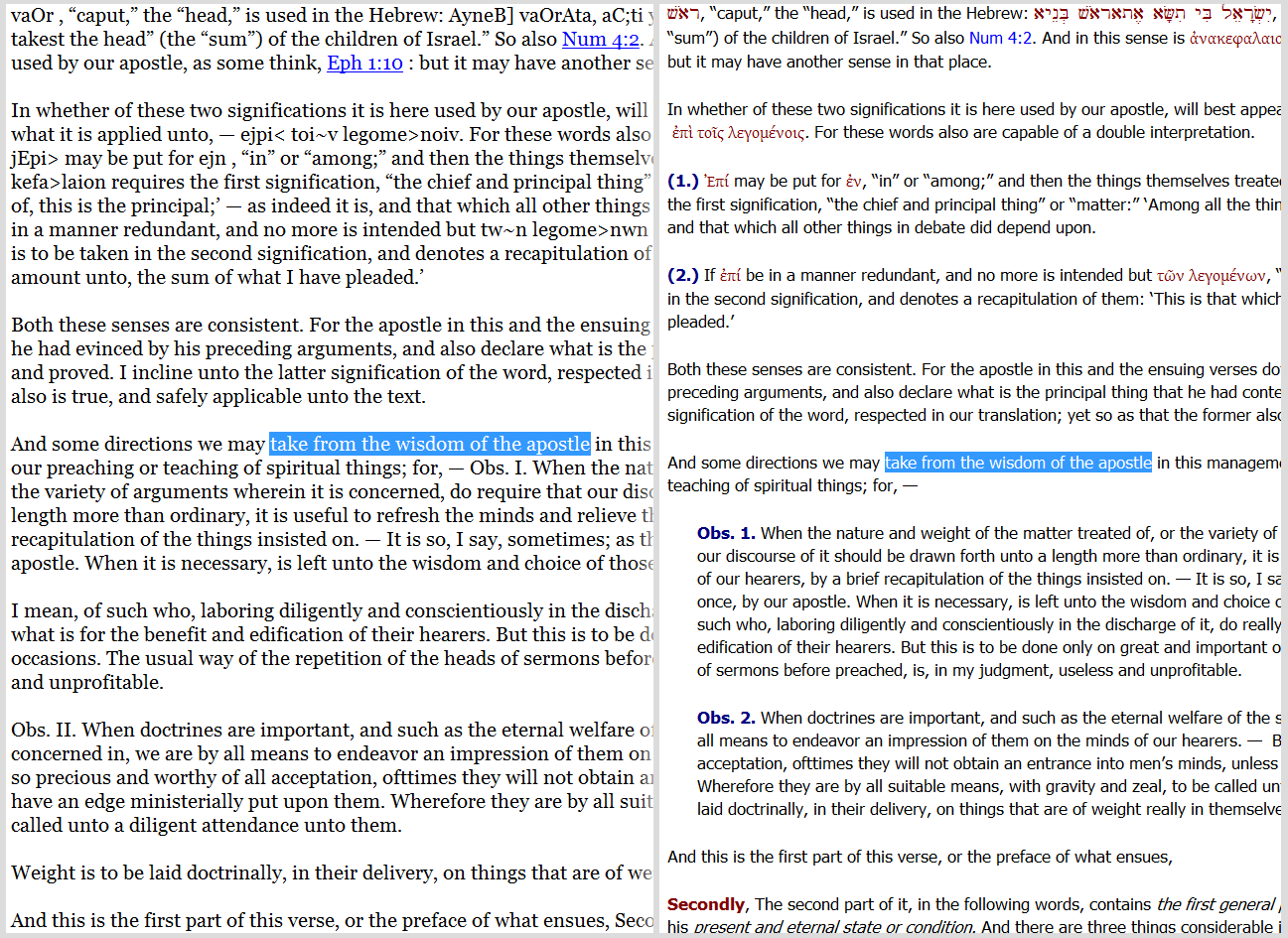 About John Owen
Born at Stadhampton, Oxfordshire, Owen was educated at Queen's College, Oxford, where he studied classics and theology and was ordained. Because of the "high-church" innovations introduced by Archbishop William Laud, he left the university to be a chaplain to the family of a noble lord. His first parish was at Fordham in Essex, to which he went while the nation was involved in civil war. Here he became convinced that the Congregational way was the scriptural form of church government. In his next charge, the parish of Coggeshall. in Essex, he acted both as the pastor of a gathered church and as the minister of the parish. This was possible because the parliament, at war with the king, had removed bishops. In practice, this meant that the parishes could go their own way in worship and organization.

Oliver Cromwell liked Owen and took him as his chaplain on his expeditions both to Ireland and Scotland (1649-1651). Owen's fame was at its height from 1651 to 1660 when he played a prominent part in the religious, political, and academic life of the nation. Appointed dean of Christ Church, Oxford, in 1651, he became also vice-chancellor of the university in 1652, a post he held for five years with great distinction and with a marked impartiality not often found in Puritan divines. This led him also to disagreement, even with Cromwell, over the latter's assumption of the protectorship. Owen retained his deanery until 1659. Shortly after the Restoration of the monarchy in 1660, he moved to London, where he was active in preaching and writing until his death. He declined invitations to the ministry in Boston (1663) and the presidency of Harvard (1670) and chided New England Congregationalists for intolerance. He turned aside also from high preferment when his influence was acknowledged by governmental attempts to persuade him to relinquish Nonconformity in favor of the established church.

His numerous works include The Display of Arminianism (1642); Eshcol, or Rules of Direction for the Walking of the Saints in Fellowship (1648), an exposition of Congregational principles; Saius Electorum, Sanguis Jesu (1648), another anti-Arminian polemic; Diatriba de Divina Justitia (1658), an attack on Socinianism; Of the Divine Original Authority of the Scriptures (1659); Theologoumena Pantodapa (1661), a history from creation to Reformation; Animadversions to Fiat Lux (1662), replying to a Roman Catholic treatise; Doctrine of Justification by Faith (1677); and Exercitationes on the Epistle to the Hebrews (1668-1684).


This topic has been visited by 17 user(s)